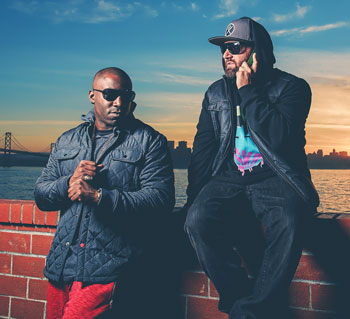 Meet Cruzmatik, a collaboration of two veterans from the music world who have come together for the first time and put together a fresh new sound that will most surely appeal to fans of all kinds of music. Featuring rapper/producer FMZ and singer/songwriter JWillz, these two lifelong friends are bringing their unique styles together to create an album that will rock the clubs as well as the streets, and make you bob your head.

Reggie Stephens, who also goes by the name Famouz, or FMZ, is a former player for the New York Giants and the Arena Football League’s Nashville Kats. FMZ gained notoriety for being the first person to legally sample a Jon Bon Jovi song on a hip-hop track (“Bad Name,” from his debut solo album, Ghetto Passport). In addition to Bon Jovi, FMZ has worked with the likes of E-40, Bun B, DJ Unk, and Rankin Scroo.
David Huff, a big-time country producer who has worked with stars like Taylor Swift, Kenny Chesney and Faith Hill, among others, has been with FMZ since the beginning and has “worked with me on both the musical production side and the business side,” says Stephens. “He taught me how the business worked.”

Jason Williams, aka JWillz, has been the lead singer of the group Ribsy’s Nickel for 15 years. Growing up in one of California’s premiere surf towns (Santa Cruz), JWillz and Ribsy’s have been playing their catchy surf/reggae/rock music up and down the California coast, sharing the stage with bands like Slightly Stoopid, Pepper, The Expendables, Fishbone, Travis Larson Band and The Chop Tops.

FMZ and JWillz have known each other for years, and when Stephens’ friend Randy Naylor, aka N.O., visited Santa Cruz in 2010, he told Stephens that he and Williams should create a group because their talents meshed well together. FMZ, recognizing the talent JWillz possessed as an artist, took Naylor’s advice and encouraged JWillz to come into the studio and see if they could create some magic. Their first song together, “Not Gone Wur Bout It,” which they performed to raucous crowds at Ribsy’s Nickel shows, sparked their creativity, and the rest was history.

They released their EP, Style Trippin, in 2013, and on VEVO, the videos for 4 of the songs got over 100,000 views, with their first single, “Party Don’t Stop,” getting over 375,000 views. Local professional athletes such as UFC Champion Luke Rockhold, Super Bowl Champion Brendon Ayanbadejo, World Series Champion Glenallen Hill and big-wave surfer Darryl “Flea” Virostko have appeared in their videos, as well as singer Chris Rene, famous for his long run on the TV show The X Factor. Now, with their debut full-length album, 4 Seasons, set to drop, Cruzmatik is set to shake up the music world and continue to give fans a taste of the talent that exists from the 831.

Cruzmatik has also used their business savvy and connections to be part of Spinrich, the independent label that their album will be released on, and Empire, out of San Francisco, will be the distribution company. In addition, they have their own in-house production team made up of FMZ, JWillz, and Justin Jayankura, aka Dublin Beats. Cruzmatik directs their own videos, and JWillz is the artist for all Cruzmatik merchandise.

The duo has also made a connection with Ryan Buell, Founder and President of Buell Wetsuits, who has outfitted surfers from all over the globe, including former World Surf League Champions Carissa Moore (2011) and Adriano DeSouza (2016), As well as Titans of Mavericks big wave surf champion Nic Lamb. Buell’s wetsuit designs were used in the blockbuster movie The Hunger Games “Catching fire” as well. Now, Buell and Cruzmatik have hooked up to produce the single “Born In The Water,” and Buell is ecstatic.

“Working with the producer Dublin Beats was awesome. Until I actually got in the studio, with a real producer, I had no idea how much I really wanted to record a real song. The process was super fun and Dublin Beats is the man?”” I reckon we slayed it, but hey, proof is in the single, right?. “Making this song ‘Born in the Water’ with Cruzmatik was insane, All being from Santa Cruz made it even better, and including Billy Imperial (aka Cooly B, ,Hip Hop pioneer) who added the scratchmaster freestyle, making it even more raw and authentic.

Cruzmatik has also been busy giving back to their community, working with SPORTS AND FITNESS for kids as well as putting on Regional 7th and 8th grade All-Star Basketball games that raise money for scholarships, among other things. . Cruzmatik is growing fast with their very unique sound of the two that came together on a mission, humble and hungry, living by their mantra: “Manifest greatness and u shall receive the fruits u deserve!”